i was in southeast asia with the exodus road for a good portion of this month.

i met a girl last week whose name was june and two of her friends - we sat at a table together and i bought her friend a drink.  these girls were being offered to us for around $60 each and they barely seemed to be 13 years old.  it was this odd dimly lit room where karaoke was being sung in a language i didn't know.   june's eyes were really pretty - she was probably 95 pounds and she barely would look at me - her smiles were forced and it was obvious she didn't want to be there with us.  the operative from the exodus road's delta team was able to gather evidence of the negotiation with the girls' handler and then in a rush we had to pay for our drinks and get out of the place because he felt things were no longer safe for us to stay there - while i was fumbling with the money to pay a group of four scary looking guys came in the back entrance.  the adrenaline of just being in that spot - the strangeness of pretending to be the very thing i despise - the heavy tropical air - and the fear i had at being discovered -  i didn't sleep that night except for a bit in a taxi that smelled like curry and a bit more at an airport.  i couldn't get the reality of what i had just seen and been part of out of my mind.  and i still can't one week later.  those baby girls are still there - somewhere in southeast asia - being sold against their will.  i am haunted by her beautiful eyes that should be innocent at her age but have seen indescribable cruelty. 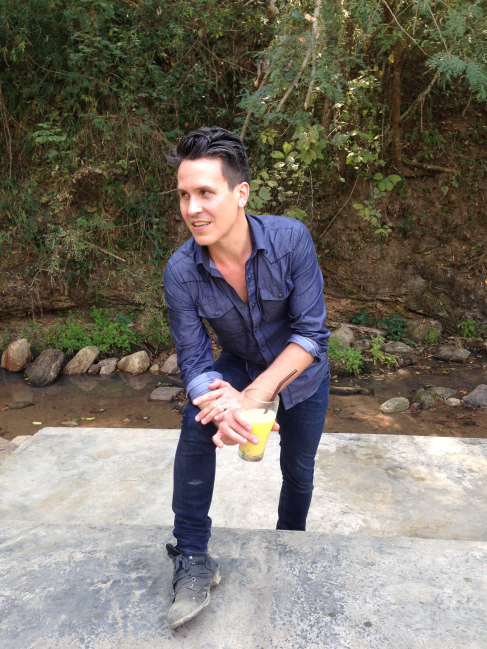 i spent 10 days in several cities and the countryside of southeast asia shadowing matt parker of exodus road and the coalition of remarkable human beings that have made rescuing children from sex trafficking their focus in life.  i sat in on meetings where matt gave high tech gear (like james bond type stuff) to the head of an anti-trafficking police unit - these units are underfunded and understaffed and this particular officer was like a kid in a candy store - not just to get the equipment, but to have the support and the help in the investigations.  that equipment was provided by funding that came through the exodus road.  i heard the high level officer talk in specifics about different rescues and raids where the equipment helped.  i was in a couple of safe houses funded by the exodus road that are used to have meetings (away from the danger of corrupt law enforcement overhearing the rescue plans sand surveillance operations).  i got to see case files from delta team on a bunch of traffickers and rings of pedophiles and was sworn to secrecy about the identities of the operatives and specifics about the tactics used to gather intelligence.

at one point i got to be a "trigger" (still not sure what that word means in this context) for a surveillance mission on a network of guys that are using southeast asia as a place to do crimes against children.  even though i wasn't in any danger, when the guy walked into the restaurant we were at, my heart was pounding in my chest because i recognized him from the photos pinned to the wall at the safe house , and for the first time the realization sank in that i'm doing something, something very very small, but something that is going to contribute to taking this guy off the street and maybe even protecting a child from his evil intentions.

and yet who am i?  i've spent the last fifteen years of my life chasing my dream and my rock band just trying to write songs that are meaningful.  a month ago i'd never even been to asia - the only places i've traveled to are germany and the netherlands for concerts - but now here i am on the other side of the world, participating in something, in a very small way, but still participating in something that i believe will contribute to pushing back this evil.  before last month i'd never been in a brothel in my life but matt took me into at least 30 brothels in an effort to identify underage girls being sold, potentially trafficked from poor farming communities and villages in the hills down into the commercial sex industries of the major cities - hidden inside the clubs, out of view from the mainstream.  these places i was in are places i'd never want my daughters to know i've been to - and yet matt has been in over 800.  and he says it's because good men aren't going into these places that the forces of evil are able to operate with such impunity.

but i'm only one person - and looking up at the stars on the other side of the planet i felt like the smallest thing in the world - up against this force of darkness and oppression that goes so deep.  it's so complicated.  what can i do?  i'm just a songwriter from nebraska.  but there i was trying to sleep in the red-light district of one of the biggest centers for forced prostitution in the world.  trying to sleep at a hotel that they rent by the hour.  i put a shirt over the pillow case and wore a hoodie over my head.  but i didn't really sleep that night either.  thanks in part to the terrible cover band across the street from our hotel that played till 3am.  i feel so small under the starlight.  it feels like the fight isn't making any difference but i can see the lights floating out in the distance.  i can hear the bright notes over all the dissonance.  can i make a dent in this?  is there any hope for change?  will the righteous rise again from indifference?  maybe we can take back these daughters from the heartless - maybe we can tear a little corner of the darkness.

the reason i went to southeast asia is because i want to be able to help raise awareness using the small platform i have with my band and whatever other influence i have.  i'm talking about it to other parents at baseball practice, on airplanes, after concerts and train rides.  but once i was over there i realized i don't want to just talk about it.  tomorrow morning i'm going to write a red x on my hand and on the hands of my babies before they go to school.  because i think that a red x will help shine a light on slavery.  but i think it takes a whole lot more than a red x to made lasting systemic change in the lives of the oppressed and this system of oppression that is so prevalent today.  i hear about a kingdom where the oppressed are found and the captives are set free.  i want to figure out how to be part of that kingdom today.   i believe in what the exodus road is doing, i've seen it first hand and i intend on returning as often as i can between tours and recording.  and i would love for you to help us rescue these children.  justice is in the hands of the ordinary.  rescue is coming!